Werewolves in the West, darn tootin.
Posted by drevrpg@gmail.com at 8:05 PM No comments:

Dragonbait has been spotted in Chult

Coming to the DMsguild on Nov 2nd. 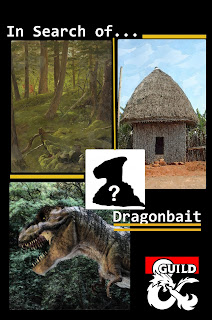 Find out how an epic party of Saurials find their role model in the dark, dank jungles of Chult.
Posted by drevrpg@gmail.com at 2:55 PM No comments:

What the 5e Ranger Should be.

I keep repeating this rant so putting it here for easy reference.

The classic ranger always felt like a grab bag.

The ranger should have been what it was in 4e: a sneaky sniper fighter with great woodlore.

It had a niche and did it well, plus it allowed you to play Robin of Locksley (the definitive ranger in my opinion).

I  think the ranger should be the main reason why any random encounters in the wilderness at night should be in the party's favor. There was this game called sang-froid: legend of werewolves where you essentially setup a trapline around your cabin to avoid being run over by monsters and rangers should do something similar.

They also should have the ability to make the random encounter table be rolled twice and pick which one the party actually encounters.

Use the subclasses to do the other Archetypes and change the powerset: avatar of the hunter god, beastmaster, harrower, seeker/arcane archer, trapper.

If you ever want to know what capstone a ranger should have at 20th level, I have two words for you: Patriot Arrow.

Don't give me that, not realistic phooey, because in a world with wizards that can alter reality and cleric that literally call on divine intervention, I can knock an arrow that acts as a rube gold berg device and still score a critical.
Posted by drevrpg@gmail.com at 10:57 AM No comments:

Well the podcast is over.

I really enjoyed being a co-host over the last couple of years, and am sad to see it go, but I'm glad we ended it instead of merely podfading.

Jeff, I got nothing but the highest respect and thank you for the opportunity to try my hand at this.

Eventually the website is going to go away, but they will be archived at archive.org for posterity.

If you had any enjoyment of listening to the podcast, leave comments below.

Like the title says, so long and thanks for all the fish. :)
Posted by drevrpg@gmail.com at 9:11 AM No comments:

Posted by drevrpg@gmail.com at 10:31 AM No comments:

drevrpg@gmail.com
Well I'm a crazy gamer with a passion for creating ideas and seeing where they lead.